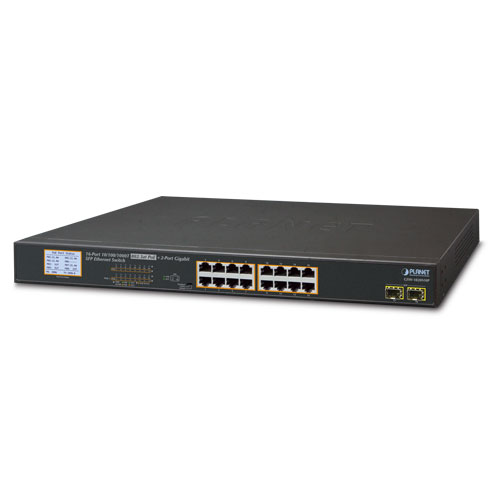 Just “Plug and Watch” for a Quick Solution
PLANET GSW-1820VHP is an ideal Plug and Watch Power over Ethernet solution which provides quick installation, real-time PoE work status monitoring and immediate troubleshooting through its unique LCD display to improve work efficiency and quality without any PC or software required.

The GSW-1820VHP is equipped with 16 10/100/1000BASE-T ports featuring 30-watt 802.3at Power over Ethernet Plus (PoE+) copper interfaces and 2 extra 1000BASE-X SFP slots with inner power system. With a total PoE power budget of up to 300 watts and non-blocking data switching performance, the GSW-1820VHP fulfills the demand of sufficient PoE power for HD IP surveillance. It offers a desktop-sized, reliable and visible power solution for small businesses and system integrators deploying Power over Ethernet networks. In the Extend operation mode, the GSW-1820VHP operates on a per-port basis at 10Mbps duplex operation but can support 30-watt PoE power output over a distance of up to 250 meters overcoming the 100m limit on Ethernet UTP cable. With this brand-new feature, the GSW-1820VHP provides an additional solution for 802.3at/af PoE distance extension, thus saving the cost of Ethernet cable installation. Its VLAN isolation function isolates ports so as to prevent broadcast storm and defend DHCP spoofing in the Extend operation mode. Flexible Extension Solution
The two mini-GBIC slots built in the GSW-1820VHP are compatible with the 1000BASE-SX/LX SFP (Small Form-factor Pluggable) fiber transceiver, uplinked to the backbone switch and monitoring center in long distance. The distance can be extended from 550 meters (multi-mode fiber) to 10/20/30/40/50/60/70/120 kilometers (single-mode fiber or WDM fiber). They are well suited for applications within the enterprise data centers and distributions.

Guaranteed Protection for a Smooth Operation
The GSW-1820VHP protects against the ESD 4KV surge to improve product stability and also protects users’ networks from devastating ESD attacks, making sure the flow of operation does not fluctuate.

Easy Installation and Cable Connection
As data and power are transmitted over one cable, the GSW-1820VHP does not need a second cable and electrical outlets on the wall, ceiling or any unreachable place. Thus, it helps to lower the installation costs and simplify the installation effort. All the RJ45 copper interfaces of the GSW-1820VHP support 10/100/1000Mbps auto-negotiation for optimal speed detection through RJ45 Category 6, 5 or 5e cable. It also supports standard auto-MDI/MDI-X that can detect the type of connection to any Ethernet device without requiring special straight-through or crossover cables.

Perfectly-integrated Solution for PoE IP Camera and NVR System
With its 36Gbps high-performance switch architecture and 300-watt PoE power budget, the recorded video files from the 16 PoE IP cameras powered by the GSW-1820VHP are saved in the 16-channel NVR systems or surveillance software in the monitoring center for possible backup references. Ideal PoE Switch for All Enterprises
Providing sixteen 802.3at PoE+ in-line power interfaces, the GSW-1820VHP can easily build a power that centrally controls IP phone system, IP camera system and wireless AP group for enterprises. Cameras can be installed around the corner in the company or campus for surveillance demands. Without the need for power sockets, the GSW-1820VHP makes the installation of cameras easier and more efficient. 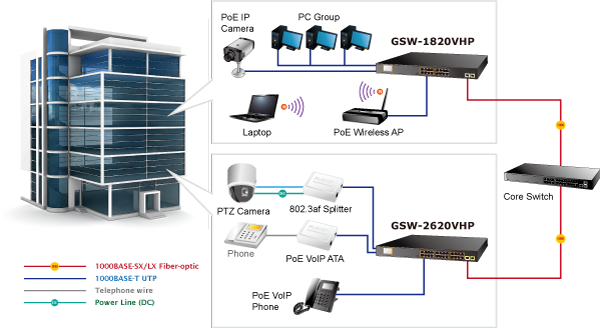