A Perfect Managed PoE+ Switch with Full PoE+ Power Budget
PLANET GS-5220-8P2T2S is a Layer 2+ Managed Gigabit Switch, which supports both IPv4 and IPv6 protocols and Layer 3 static routing capability, and provides 8 10/100/1000BASE-T ports featuring 30-watt 802.3at PoE+, 2 additional Gigabit copper ports and another 2 extra 100/1000BASE-X SFP fiber slots. Each of the eight Gigabit ports provides 30 watts of power, which means a total power budget of up to 240 watts can be utilized simultaneously without considering the different types of PoE applications being employed. It provides a quick, safe and cost-effective Power over Ethernet network solution to IP security surveillance for small businesses and enterprises.

Centralized Power Management for Gigabit Ethernet PoE Networking
To fulfill the needs of higher power required PoE network applications with Gigabit speed transmission, the GS-5220-8P2T2S features high-performance Gigabit IEEE 802.3af PoE (up to 15.4 watts) and IEEE 802.3at PoE+ (up to 30 watts) on all ports. It perfectly meets the power requirement of PoE VoIP phone and all kinds of PoE IP cameras such as IR, PTZ, speed dome cameras or even box type IP cameras with built-in fan and heater for high power consumption.

The GS-5220-8P2T2S’s PoE capabilities also help to reduce deployment costs for network devices as a result of freeing from restrictions of power outlet locations. Power and data switching are integrated into one unit, delivered over a single cable and managed centrally. It thus eliminates cost for additional AC wiring and reduces installation time.

Intelligent Powered Device Alive Check
The GS-5220-8P2T2S can be configured to monitor a connected PD (Powered Device) status in real time via ping action. Once the PD stops working and it is without response, the GS-5220-8P2T2S will resume the PoE port power and bring the PD back to work. It will greatly enhance the network reliability through the PoE port resetting the PD’s power source, thus reducing administrator management burden.

Scheduled Power Recycling
The GS-5220-8P2T2S allows each of the connected PDs to reboot at a specified time each week. Therefore, it will reduce the chance of PD crash resulting from buffer overflow.

SMTP/SNMP Trap Event Alert
Though most NVR or camera management software offers SMTP email alert function, the GS-5220-8P2T2S further provides event alert function to help to diagnose the abnormal device owing to whether or not there is a break of the network connection, loss of PoE power or the rebooting response by the PD Alive Check process. 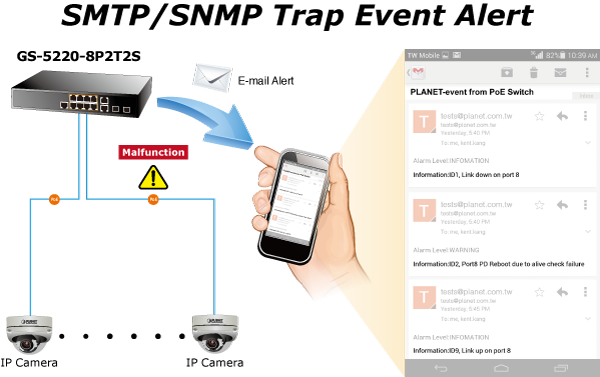 PoE Schedule for Energy Saving
Besides being used for IP surveillance, the GS-5220-8P2T2S is certainly applicable to build any PoE network including VoIP and wireless LAN. Under the trend of energy saving worldwide and contributing to the environmental protection on the Earth, the GS-5220-8P2T2S can effectively control the power supply besides its capability of giving high watts power. The “PoE schedule” function helps you to enable or disable PoE power feeding for each PoE port during specified time intervals and it is a powerful function to help SMBs and enterprises save energy and budget.

Solution for IPv6 Networking
With the support for IPv6/IPv4 protocol, and easy and friendly management interfaces, the GS-5220-8P2T2S is the best choice for IP surveillance, VoIP and wireless service providers to connect with the IPv6 network. It also helps SMBs to step in the IPv6 era with the lowest investment and without having to replace the network facilities even though ISPs establish the IPv6 FTTx edge network. 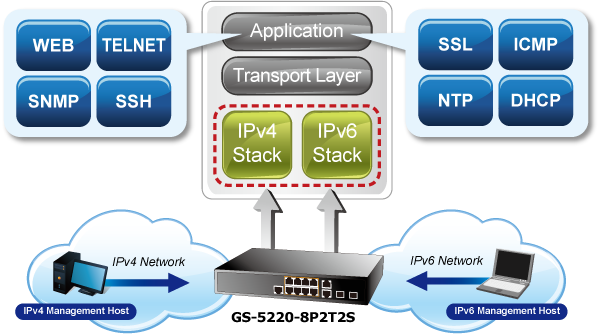 IPv4 and IPv6 VLAN Routing for Secure and Flexible Management
To help customers stay on top of their businesses, the GS-5220-8P2T2S not only provides ultra high transmission performance and excellent layer 2 technologies, but also offers IPv4/IPv6 VLAN routing feature which allows to crossover different VLANs and different IP addresses for the purpose of having a highly-secure, flexible management and simpler networking application.

Powerful Security
The SGS-5220-8P2T2S offers comprehensive layer 2 to layer 4 access control list (ACL) for enforcing security to the edge. It can be used to restrict network access by denying packets based on source and destination IP address, TCP/UDP port number or defined typical network applications. Its protection mechanism also comprises 802.1x Port-based and MAC-based user and device authentication. With the private VLAN function, communication between edge ports can be prevented to ensure user privacy.

Flexible and Extendable Solution
The 2 mini-GBIC SFP slots built in the GS-5220-8P2T2S support dual speed as it features 100BASE-FX and 1000BASE-SX/LX SFP (Small Form-factor Pluggable) fiber-optic modules. Now the administrator can flexibly choose the suitable SFP transceiver according to not only the transmission distance, but also the transmission speed required. The distance can be extended from 550 meters to 2km (multi-mode fiber) and up to 10/20/30/40/50/70/120 kilometers (single-mode fiber or WDM fiber). They are well suited for applications within the enterprise data centers and distributions.

Layer 2+ VLAN Static Routing and PoE Application
With the built-in robust IPv4/IPv6 Layer 3 traffic routing protocols, the GS-5220-8P2T2S ensures reliable routing between VLANs and network segments. The routing protocols can be applied by VLAN interface with up to 32 routing entries. The GS-5220-8P2T2S is certainly a cost-effective and ideal solution for enterprises.