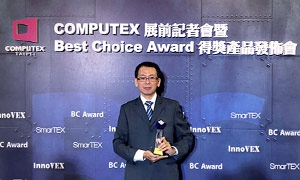 PLANET Technology, a global leading IP-based networking company, announced that its newly-launched Enterprise-class Wireless LAN Controller, WAPC-1000, has won the prestigious Best Choice Award (BC Award) 2018, the official award of COMPUTEX TAIPEI. PLANET WAPC-1000 is the world’s first Wireless LAN Controller which can centrally manage up to 1,024 indoor and outdoor wireless APs via the cloud network. The BC Award has been won in the “Communications & Networking” category.

The BC Award, promoted by COMPUTEX TAIPEI, one of the world's grandest ICT events, aims to select the best ICT products of the year by evaluating the product’s functionality, innovation and market potentiality. PLANET WAPC-1000 outshines its rivals to win the award by innovatively integrating features of AP management via the cloud network, providing unique user-friendly management interface and offering exclusive system upgrade and AP license free-of-charge.

At this year’s COMPUTEX TAIPEI (June 5-9), PLANET’s BC Award-winning WAPC-1000 Enterprise-class Wireless LAN Controller will be displayed both at PLANET’s booth no. A0604 at TWTC Exhibition Hall 1, and the Taipei Nangang Exhibition Center where the benefits of having the WAPC-1000 managed your large-scale wireless LAN will be made known.